A One on One Conversation with Cody Alan and Dierks Bentley

Hear’s the Thing is a story about what is possible when someone is brave enough to listen to others… and, ultimately, themselves without judgement.

For Cody Alan, one of country music’s most famous on-air radio and TV personalities, listening to other people has always been a crucial part of his role. It was by fostering his ability to hear others that he discovered the person he most needed to listen to was himself. Listening ultimately led him on a journey of self-discovery where he found the courage to come out as gay, the openness to question spiritually, and the strength to explore a new definition of parenting and family.

In his debut memoir, Hear’s the Thing, Cody shares some of the many lessons he’s learned along the way, including:

Cody’s story will inspire you to hear that inner voice that is leading you to a deeper connection with yourself and the people around you. 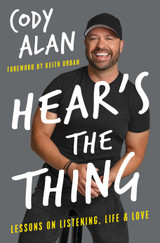 If you have further questions or need assistance with an order you placed, please contact cs@unisonevents.com

Yes! You can view the event on-demand whenever you would like once you purchase the ticket. Event access will expire 90 days after purchase.
When will I receive my ticket, and how do I access the event?
You will receive an email with access information shortly after you place your order. If you do not receive it, please check your junk/spam folder to be sure. If it’s not there either, reach out to cs@unisonevents.com for assistance.
When will I receive my book?
Your order should ship within one week. You will receive an email with a tracking number. Please note that transit times are currently longer than usual, and it could take up to 2-3 weeks to deliver unless you choose expedited service at checkout. Books ship from Nashville, Tennessee, so the further you are from Nashville, the longer the possible transit time.
I ordered a copy of the book somewhere else, can I get a ticket to the event?
All tickets to this event include a book purchase. If you already ordered a book, you can share the extra copy with a friend!
I haven’t received my ticket or my ticket isn’t working, what should I do?
If your email address is not admitting you to the event, please reach out on our contact page and we will respond shortly (very shortly if the event is about to begin). If you didn’t receive an order confirmation / ticketing email, there may have been a typo in your email address, or you used a different email address than expected. Contact us as soon as possible with your name and billing/shipping address and we will help you out.